Full disclosure, I wrote that Netflix could continue growing and increase to a price beyond $600 7 months ago. I still believe it, but it’s going to take longer and it’s going to require renewed focus and execution. The issues I raise below, have surely been debated ad nauseum by Netflix management, but clearly what they’re doing is not working.

There have been strategic misses:

Here is the good news:

Netflix is always raising prices and this is generally fine, as long as we (customers) feel there is value. However, they were too aggressive this time. They went into their Q4 earnings call with weak Q1 guidance AND made the decision to raise prices. Management explained on the call that it was a net positive for revenue, but that misses the point. They need to accept that the Street wants subscriber growth. Netflix is constantly trying to guide analysts to focus on revenue and not subscriber numbers. It’s silly at this point, because we all know subscriber numbers are the best indicator of growth in the business.

Maybe it was “good” for revenue, but management should weigh that against the destruction of shareholder value in the stock price, which dropped 30% after the Q4 earnings call. There will always be some churn when you raise the price, but be smarter about it!

Finally, I think they need to lean more into lower prices in emerging markets. Pull the customers into the eco-system, and then improve content over time and then raise prices.

I’m going to stay high-level here, but I think most people would agree with a couple things:

BTW, I’ll concede on this last point that it’s “more complex than that”. There are complicated licensing issues and apparently the original family that developed “Bond” has veto rights, blah blah, blah. It just seems Netflix management always talks themselves out of these risky acquisitions. But they take huge risk trying to develop their own franchise in Jupiter’s Legacy. I was so excited, but it was unwatchable and canceled after Season 1.

As an admirer of Netflix management team, it pains me to say this, but their Q4 earnings call on January 20 was embarrassing to watch. They seemed surprised at the market’s negative reaction to pathetic Q1 guidance. They also seemed unprepared to explain the issues surrounding lack of growth. The tone of the video call was completely “off”; management cheerful and positive, while the street is chopping 30% off the stock price.

The Q1 earnings call last week was much better. Appropriate tone and prepared to talk about the issues.

In trying to zoom out, what worries me here is perhaps management became complacent in their dogmatic strategy of the last decade. Now competition and saturation have emerged and they need to adjust. BTW, they need to update their Long Term View. It’s dated and has no mention of gaming or advertising.

The good news here is I think they recognize this is a 5-alarm fire, it’s all hands on deck and decisive action needs to be taken. I have faith that Reed and Ted can make this happen. For long-term followers, this is a repeat of 2011 DVD split; but worse. Reed fixed it then and he’ll die trying to fix it now!

Sports. I have long stated that I think Netflix has (now “had”) a great opportunity to utilize their technology prowess to bring much needed innovation to sports programming. They have consistently steered away and Ted again on this earnings call said they don’t see a path to profitability in that space. Well now Disney, Amazon and Apple are all going big on sports, so it’s likely too late anyhow.

Advertising. I’m glad they are experimenting. I wish they would have done it sooner. I think it’s only appropriate in emerging markets. This will be a tough needle to thread. Risk is cannibalizing paying customers, and then getting addicted to ad revenue and inundating us with ads.

Wokeness and Pulling out of Russia

This is where I may get canceled, but needs to be said.

Wokeness: There are thoughts that the Netflix decision makers based in LA (one of the most liberal cities in the US) are allowing “woke” politics to influence programming too much. Did anyone actually watch Colin Kaepernick’s Netflix special? And now he’s trying to get back in the NFL! To Netflix’s defense I applauded Ted Sarandos defense of Dave Chapelle. But even Elon Musk has weighed in on the matter: 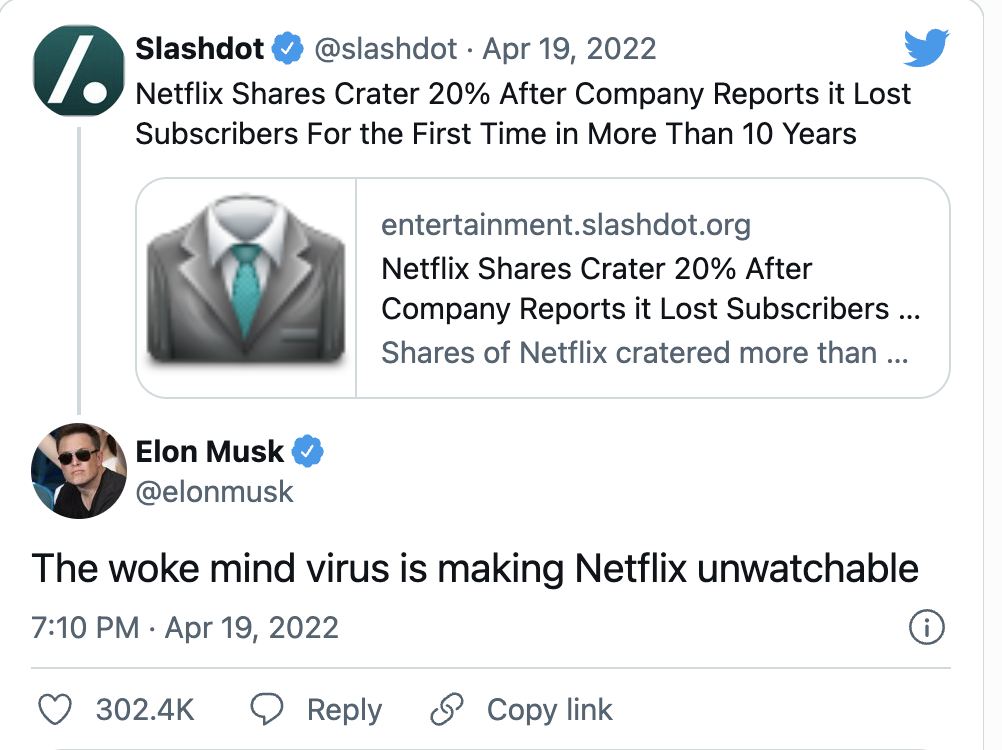 In summary here; Netflix should stay out of politics. Take a page out of Brian Armstrong’s play-book (CEO of Coinbase). The quick backstory is during the 2020 woke madness and employee uprisings, he told employees that at work we are focused on the mission, not politics. He took a lot of heat at the time and lost about 5% of his workforce, but he says Coinbase is much stronger as a result. Great recent interview with Brian here and Netflix discussion as well.

Netflix needs to focus on the mission: “At Netflix we want to entertain the world.”

Russia: Netflix just walked away from a population of 144 million people; maybe 40 million households; resulting in a loss of 700,000 subs. Obviously, the war Putin is raging against Ukraine is horrendous and criminal. But it’s not entirely clear to me how canceling Netflix in Russia helps. Yes, it’s a sign of solidarity with the world that we will stand against Russia. But it’s also simply a virtue signal. A costly one.

I don’t think Putin gives a s**t about Netflix; and he is the aggressor and decision maker. As a shareholder, I’d prefer to be collecting fees from 700,000 and growing paying customers in Russia; they’re not responsible for Putin’s madness. Further, if you want to induce economic harm, you could argue that we should have kept Netflix “on” in order to extract $’s out of the country.

When this conflict eventually ends, hopefully Netflix will be able to simply switch it back on. Worth noting there are other complex issues in Russia, like their requirement for Netflix to carry local TV.

For years we’ve been talking about how there are 600 million global households (x-China) and growing. Everyone is cutting the cable cord. This trend didn’t simply change in the last 4-5 months. Competition is strong in the US and growing more internationally. But it’s unlikely there will be 20 apps or services that everyone pays for. There will be consolidation and Netflix will likely be one of those Apps that most people choose to pay for.

As stated above, it’s good that they will now experiment with gaming and perhaps advertising.

Cracking down on password sharing is long overdue. They claim there are 100 million or more non-paying households; 30 million in US/Canada.  Netflix is a tech company and I think they can accurately estimate the number. I just hope they move fast on shutting down the sharing. If they can capture ½ those house holds over the next 2 years, that is 25 million new subscribers per year!

I’ve written about this before, but Netflix has done a phenomenal job at building out its international operations at scale. At this point Apple and Amazon are probably close to them in terms of international technology stack and ability to deliver streaming globally.

But Netflix still has a big lead in producing international programming, dubbing, subbing and making that programming available in all regions. The best example of this by far is obviously Squid Game, a relatively low budget Korean series that became a global phenomenon. Ted also mentioned their global Spanish hit Money Heist, would now have a Korean spinoff. It’s likely we’ll see Squid in other countries as well. Point of all this is Netflix is at scale and can create content that travels globally at better efficiency (i.e. lower cost)  than other studios (for now).

4 officers of the company with 80 years combined experience. Could work both ways. Maybe they need to mix it up. But, I’d err on the other side: I think they know how to work well together, move fast and course correct. They were all there in the DVD days and pivoted successfully.

Netflix can have no more net subscriber loss quarters. They guided to negative 2 million in Q2, but I’m hoping they’ll pull a rabbit out of a hat and be up slightly. They need a couple of big content hits. In terms of predictions: I don’t think they’re going to see the $600 range for a very long time. I hope I’m wrong.

Macro-economic conditions aside, the real question is will analysts begin to value them like

traditional media? If so, they’re screwed, because then you’re looking at price-to-sales ratios of 2-3. Netflix is at 3.2 now. But for context Amazon is also at 3.2 and Disney is 2.9. So guess what: One could conclude Netflix is fairly valued today!

Prediction: Netflix finds their way and climbs back north to $300 by year end. Or if their Q3 content slate and guidance is not good, they could be cut in ½ again; markets are vicious!

You can find me sean@hathawayfinancial.com